Our customers and The Press have spoken.

The Razz from Volti Audio is a speaker that should be on your short list!

“They not only give you effortless realistic sound in your home, but they also do so with top-quality fit and finish and build quality that will last for generations. Highly recommended!!!” 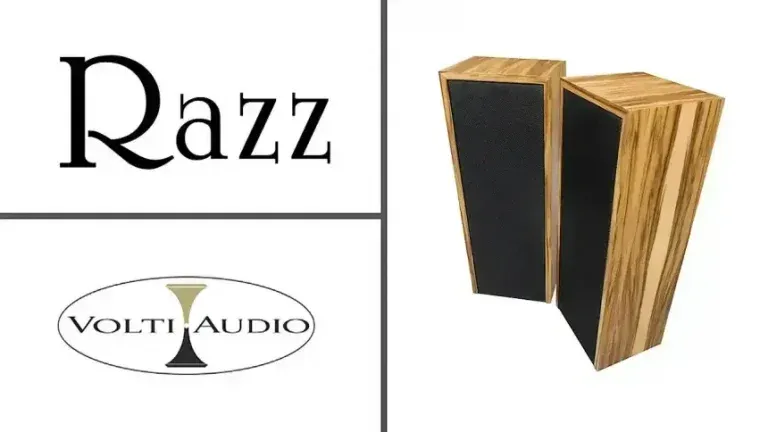 “What’s most shocking about this project was the completely affordable price, not just in high-end terms, but even when discussing mid-fi terms–this would still be a massive bargain. Do I have your attention yet?​.” And also a nomination for ‘Best Value of the Year 2021″

“The Razz loudspeakers strapped me in and took me on a “Wildly Civilized” audio trip. In the end, it delivered me to my destination in style and with a smile on my face.” 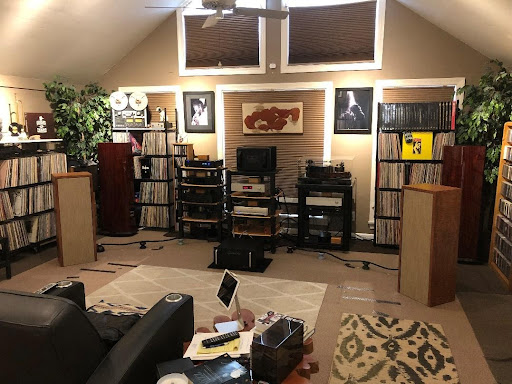 The Razz is still the king here. I am finding that they are the best at everything I can throw at them. Better than any speaker I have had here in my sound room.

Not only can they rock (boy can they rock!) but they can be as subtle and quick as my beloved Quad ESL’s.  Choral music is a stand-out.

I am using just a 9-watt SET amp. It is the first system I have had in my house that has the “magic” I have been looking for for a long time.

Thanks for all your efforts

. . . . it is mind blowing how powerful it is and how you feel the performers are in the room. The clarity is next level. I’m convinced on my vinyl I’m hearing new things, like the creak of a chair in the studio, or the horn player discreetly breathing in, or drum work dynamics I never heard before, talk about being in the room in 1960. Beautiful.

I’ve got the digital set up and it sounds really great as well. I need to spend some more time with the digital system doing more dedicated listening, but I’ve been having too much fun with my vinyl so far.

The Razz speakers produce excellent reproduction of instruments and human voices, very much as if you are in the room with the performing musicians.

I am extremely happy with the Razz speakers and the beautiful music they produce in my home.  I would strongly recommend the Razz speakers to anyone who wants to hear the subtleties in performance of both instruments and voices and places a premium on accurate tonal reproduction

​I’m actually breathless. I’ve only had a chance to listen a bit, and the room setup is weird, but they are magic. They have presence, speed, accuracy, clarity and they sing and hum and dance!

I’m powering them with my Shindo Montille (thanks Art) and they are giving me a huge smile.

Thank you for the magic.

” . . . precise imaging, a huge soundstage (this is where Voltis, in general, pass everyone else by), midrange purity, tonality and coherence. That last one, by the way, is particularly interesting for a horn speaker system . . . “ 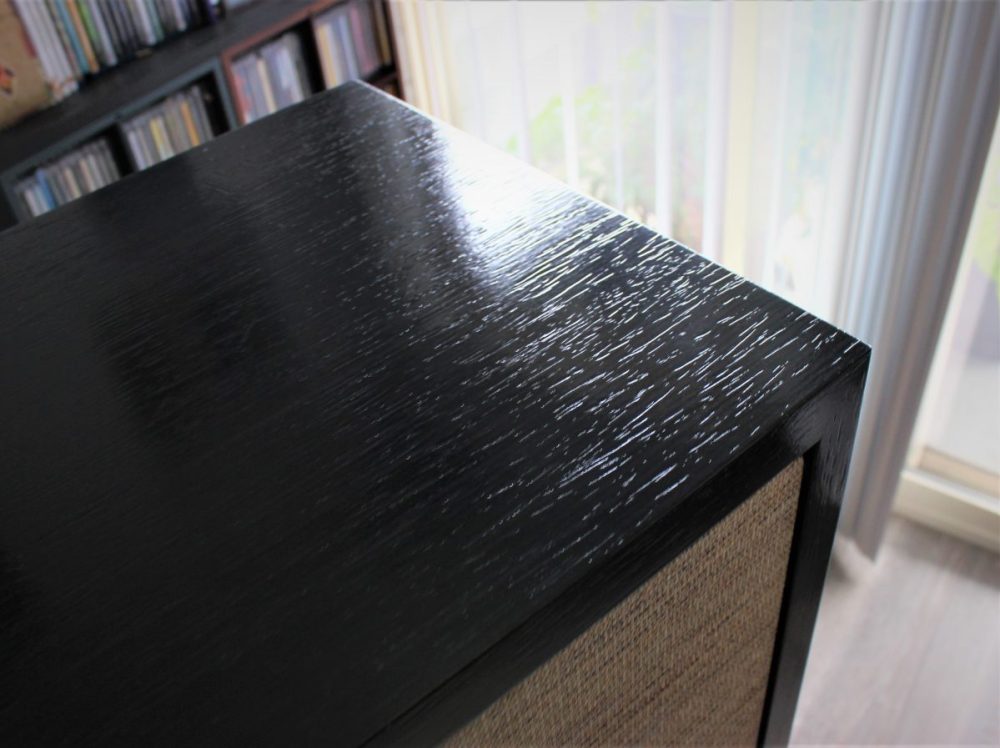 “The ability of the Volti Audio Razz midrange to bring female vocals into the room was stunning. I’ve only heard this level of spatial imaging on a handful of systems.” 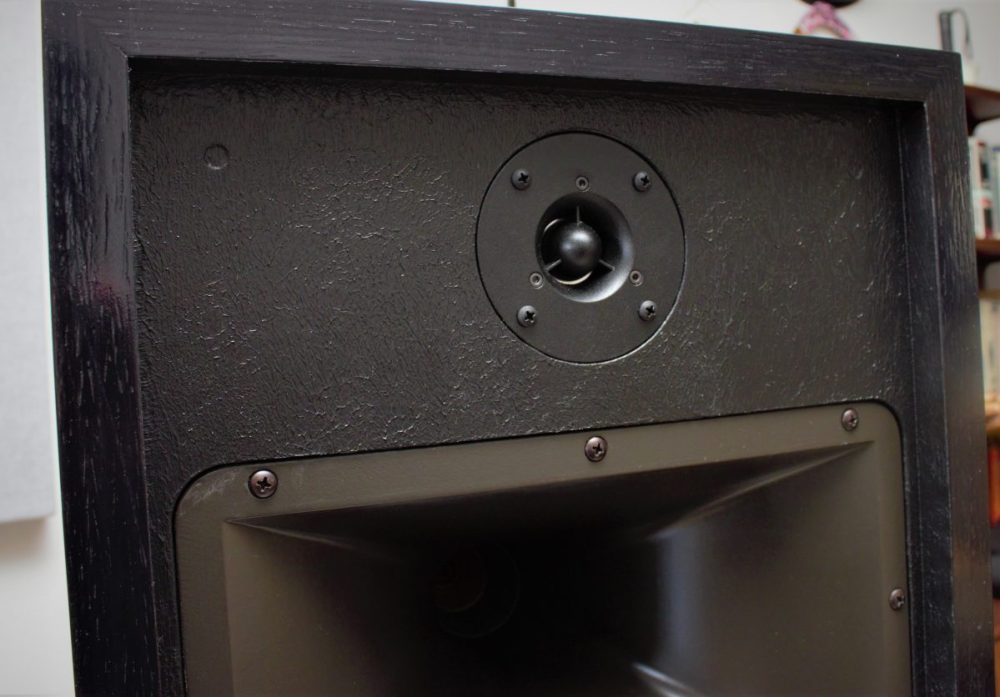 I recently purchased a pair of Razz speakers from Greg–here’s my initial take. They replaced a pair of Klipsch Forte IIIs . . .

The bass response on the Razz is much better. For some reason, you look at the woofer on the Forte III’s and the giant passive radiator on the back and you expect a lot of bass, but it really doesn’t happen. Maybe pushed about 10” off the wall, but leads to other issues. I never minded the bass on the Klipsch but the Razz are clearly more prominent in the bass response. What really stands out is the integration between the upper bass and lower midrange. I’m hearing details in this area that I NEVER heard out of the Klipsch.

The imaging is also much better on the Razz. They throw a nice wide sound stage in which all the images are clearly firmly locked in place. That just isn’t something the Klipsch did all that well.

For me, the biggest improvement is how real the instruments sound coming out of the Razz. The horns sound like they are in the room with you. Acoustic guitars are right on. Combined with better detail coming out of the Razz, this is where the two speakers are the most different. The number of times I heard a detail or a separation of voices on the Razz that I have never noticed on the Forte III’s was astounding.  And there is no upper midrange glare of any kind on the Razz. The volume goes up and it’s just as listenable as at lower levels.

The Razz are simply better speakers.

I set up my Razz speakers today, and after a bit of tinkering, I can honestly say . . .

. . . they are the best and most natural sounding speakers I’ve ever owned.  They replaced an excellent pair of more expensive Harbeth HL5 Super Plus, and after listening for a few hours, my wife and I both think the less expensive Razz are much better and do a much better job of capturing what real instruments sound like.

I’ve owned dozens of pairs of speakers over the years, including many from the Klipsch lineup and the Razz are in a different league.  I couldn’t be happier with my purchase.

“When the drums crashed at the beginning of ‘In the Flesh’—I was listening very loudly—I nearly jumped out of my chair. As the first motif segued into the descent of a WWII bomber crashing into ‘Thin Ice,’ the intensity of the crescendo and sense of realism were electrifying.” 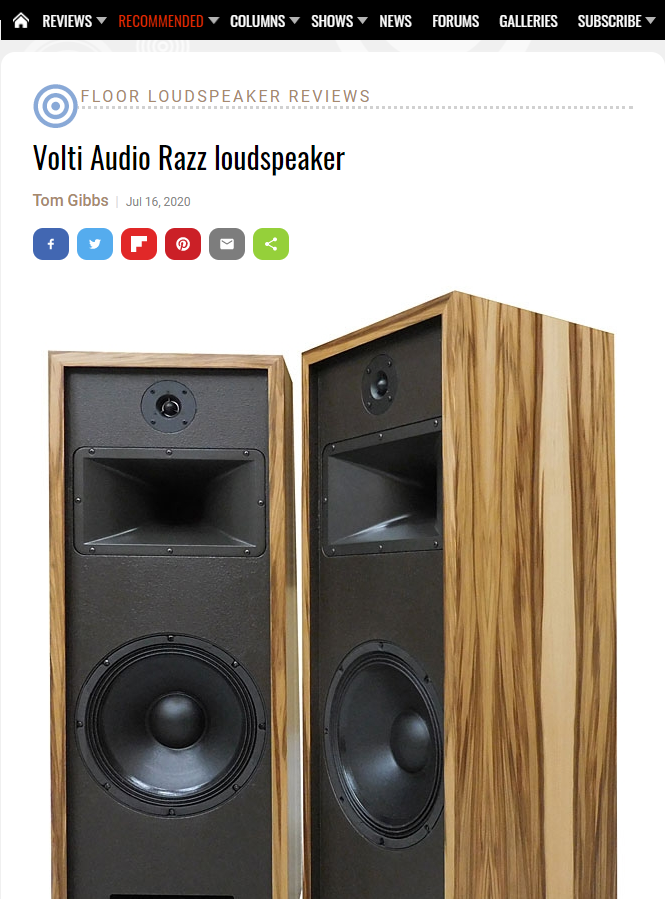 I first heard of Volti Audio and Greg Roberts around 2014 when attending Axpona.   Greg was demonstrating the Vittora at that show.  The speakers were very different in a good way from anything else I heard or saw that day.  Greg had high energy going in that room and he had a huge . . .

. . . whiteboard with markers for people to give their impressions.  The main impression that weekend had been “fun”.  In fact, I can remember only a few of the other rooms from that visit, and of those few, mostly speakers costing much more and looking like typical audiophile speakers.

Flash forward to the present.  I have been using small to medium floor-standing speakers since I came back to the hobby in 2005.  I have had many amps, preamps and pieces of front-end gear.  95% of todays audiophile speakers have narrow front baffles and most have some version of a dome tweeter.  Many of these speakers are 2 way.  I won’t mention the name of my last set of speakers, but they came from another small maker in the US who produces very high quality speakers that generally win rave reviews with many reviewers buying the review pairs.  So, my bar is pretty high.  These prior speakers have an efficiency of 91db per watt, are 2 way with bass down to the mid 30hz range.  They were supplemented with 2 small, fast, powerful subs.  My amps are SET mono-blocks outputting appx. 8 watts.

However, from that show in 2014, I never forgot the Volti Audio Speakers.  As such, I finally acquired my own set of Razz.  The first thing I noticed (which did not surprise me as the Razz are 97db efficient), much less power was needed from the amp.  From this efficiency all of the good things just build on each other.  I will attempt to play reviewer now.

The first thing of note is that all of the small, narrow floor-standers I have had and heard in other’s systems have a gap between the lower midrange and the upper bass.  This is where the trombones, cellos, tympany among other instruments live.  With my previous speakers, I had plenty of midrange and plenty of low bass, but that octave was weak, offering only suggestions of these instruments.  With the wide baffle 3 way Volti’s those instruments come to life.  They bounce and sing with real presence, not shadows as before.  If the Volti’s did nothing more, I would consider them a success, but wait, there’s more.

On certain recordings of tenor sax and trumpet as well as some nasal high voices (Neil Young), dome tweeters can give a sound that bores into your head.  This may be amplified by certain front end equipment and phono cartridges.  In this range of music, the Razz just lets the music pour out without the blare.  This is not to say the music is subdued, but just natural.  Because, what better type of speaker to reproduce a belled instrument than a horn.  Never fear, when the musician leans into the horn, you hear the attack or the reed vividly, but not in a sharp way.  What about the upper registers?

The tweeter on the Razz is a real gem.  It blends with the midrange seamlessly, as such you simply have a continuation of what was described for the midrange.  There is an ease of presentation in the upper register which encourages one to keep listening and the only limitation to your session is how much time you have, not because your ears can’t take it anymore.

What about dynamics?  Off the chart.  If you think SET amps sound sweet and weak, you have not heard one with these speakers.  They thunder when the music calls for thunder as it does on Dire Straits’ Brothers in Arms.  But you can discern Forte from Mezzo Forte in a Rachmaninoff piano concerto.  I have also heard small details never before heard on 40 year old records I thought I knew inside out.  For example, on “Don’t give up” by Peter Gabriel, with my prior speakers there is a section that always sounded like a 2 part harmony, I now know it to be a four part harmony, but it is so subtle, after 30 years, I finally have a speaker that let me hear it.  This precision of presentation allows the Razz to show great stage width, depth and height as well.

I have to say a word about the service after sale.  Greg builds these speakers with love and he really cares that his buyers are happy with them.  As such, we have e-mailed nearly every day since I received my set with ideas for me to try.  The suggestions have been spot on.  I don’t know how he has time to build the speakers and communicate with his buyers, maybe he has a 26 hour clock?

I now am faced with the awful task of re-listening to my entire music collection.  Tough work, but someone’s got to do it.  I am just glad I can do it with the Razz.